As I had said in a previous post, my roleplaying began at the same time as my love of Star Trek via the FASA Star Trek RPG.  The two came hand-in-hand and even introduced me to one of my best friends who still plays in my regular campaign all these years later.

This has over the years given me a rather unique view of Star Trek, that does not necessarily conform to that of either the TOS Trekker, the Movie Era Trekker, the TNG+ Trekker or even the new JJ Abrams Trekkers.  For me, if I had to take a moniker it would be that of a FASA Trekker. 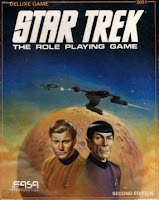 There is a feeling to the FASA Trek universe that I just feel happily connected to.  I love almost everything about it, though the game system is a bit dated, and can say that it truly, more than anything, created a Star Trek universe that I can honestly see happening.

To be more specific, I like the Movie Era period, set within the FASA Trek universe.  You know?  That thing on the front of the Enterprise is a sensor dish and NOT a magical do-it-all navigational deflector.  The Federation uses credits and the Klingons... oh the Klingons!  Well that will be a post for later, but let me just say Kai JM Ford!


So then, what is Ultimate Star Trek?

Basically it is my amalgamated Star Trek Universe designed for role-playing. Over the years of Star Trek, between various series, rpgs, fan books, et al, the idea of Star Trek has changed. Sometimes dramatically. I can't say that I enjoyed all of it either and of late I have noticed a rather steep decline in the enjoyment I have been getting from official Star Trek product.

One day I noticed that Marvel Comics had begun to revamp their universe with a side set of comics called Ultimate (Ultimate X-Men, Ultimate Spiderman, etc). In these comics each the basics remain identifiable, but the flavours, specifics and such have changed. It struck a chord in me. 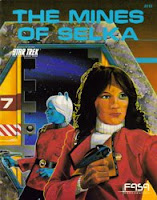 Do I think my vision of Star Trek is better than anyone else's? Of course not. It is just more to my tastes and my desires. Most of it comes from other sources and not me. That means I respect and enjoy the creations of others and have co-opted them into this game. All respect and credit where due.

In the end I think Star Trek has become as much a part of literature and western mythology as Shakespeare's works or Lord of the Rings, but like Shakespeare's works, I believe it is open to interpretation, adaptation and change. Your mileage may vary. If you believe that the canon of Star Trek is absolute, then you will probably not like this page at all. It is so very far from canon and proudly so. 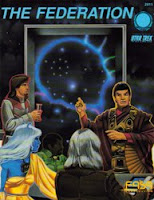 That said I will occasionally post here an Ultimate Star Trek article, or image, or something, as sort of an ongoing-series to explore what it is to me.  Some of the topics I will cover are, but not limited to, as follows;

• The timeline of the Ultimate Star Trek universe.

I hope you will enjoy the articles, and as always feel free to ask me questions about it as I go along.